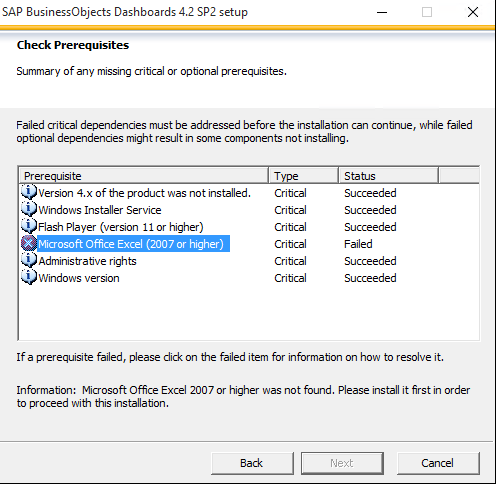 Annoying isn’t it? Excel 2016 is installed (or Office 365), but that doesn’t count as 2007 or higher. Jokes about Office upgrades aside, this shouldn’t be a problem, but you can’t install.

The problem is caused by the way that Dashboards try to detect the presence of Excel. It’s not enough to just check that there is ‘some’ application associated with xls and xlsx, it needs to be proper Excel. The way that Dashboard does this is to search the registry for certain values.

Everything that follows is unofficial and unsupported.

The values to search for are stored in a file called ‘product.seed.xml’. It’s stored in ‘dunit\product.xcelsius-4.0-core-32’. If you open this in an editor (I prefer Notepad++ as it handles the formatting well), you’ll see a section that starts:

Followed by several entries similar to this:

In English, it’s just telling the installer to search the registry to see if Excel 10 is installed. The following entries are for later versions of Excel. You’ll see the last two entries are for 64 bit Excel – don’t get excited, they’re just to throw an error about 64 bit Excel!

My original plan had been to create a new entry to search for Excel 2016. Problem is, I have Office 365 installed which appears to have a different structure in the registry.

First backup the file. Then, starting from <prerequisite, delete everything up to and including the </prerequisite> tag after the final Excel entry. In my editor, that’s line 74 up to line 130.

Now run the installer again. If you’ve made an error, the install will very quickly fail. Restore your backup file and do the edit again. 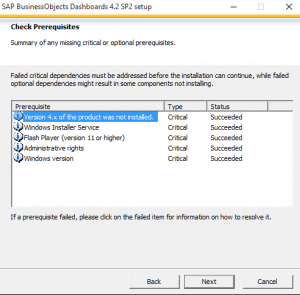 Keep pressing Next, then your licence key, you’re good to go.